I tend to make too much food.

It's a slight issue, really. I make mass quantities, we eat them for a couple days, then we get sick of them so I have to do something to switch it up. 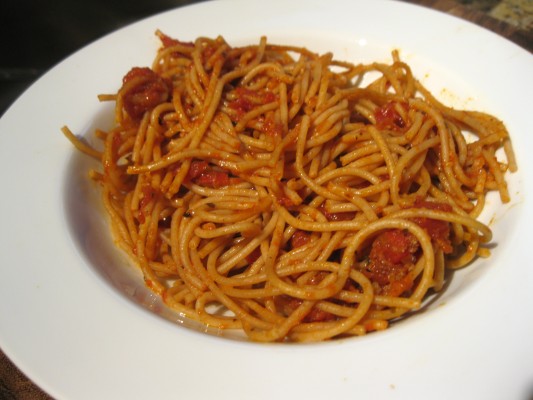 Today's switch-up was pulled on my classic spaghetti with marinara recipe from this weekend's pasta bar.

You can only eat so much spaghetti, and then you need something to kick it up a few notches.

My answer tonight was eggplant. Specifically, eggplant that I breaded and pan-fried, then melted mozzarella on top of. 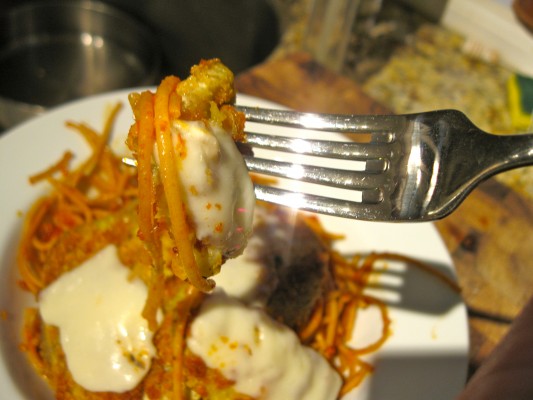 I can't get enough of that spaghetti now, as long as it comes with some crispy eggplant.

⅓ baguette, or 4 slices of bread

Heat oven to 350 degrees. Rip baguette or bread into small chunks and place into the food processor. Pulse until finely crumbed, then drizzle in 1 tbs. olive oil. Add ½ tsp. salt. Pulse until all mixed together, then spread on a baking sheet. Place on middle rack of oven and bake until breadcrumbs are toasted, but not burnt, around 5 minutes. Toss a few times with a spatula while cooking. Remove from oven and pour into a shallow bowl. Crack the egg into another shallow bowl, mix well with a fork.

Peel eggplant, then slice into thin rounds. Dip each round, one at a time, into the egg. Shake off excess egg, then place into the breadcrumbs. Coat well and pat to adhere. Once half the rounds are coated, heat a large skillet over medium heat. Pour in 2 tbs. olive oil and heat. Once hot (test it by dropping in a small piece of breading – if it sizzles, then the oil is hot enough), lay eggplant slices in a single layer. Fry for around 2 minutes, until browned, then flip and fry the other side until browned. 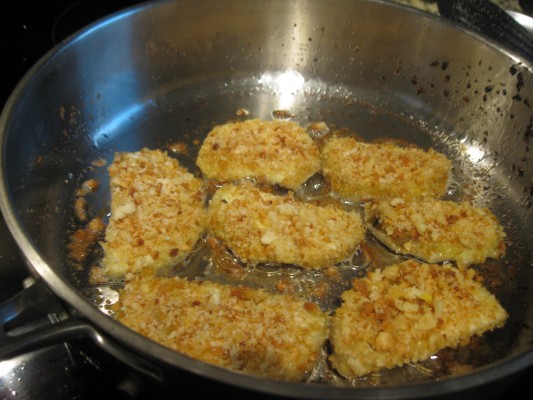 Remove from skillet and lay in a single layer on a baking sheet. Continue until all slices are browned. Lay a thin slice of mozzarella on each eggplant slice. Place in 350 degree oven and allow cheese to melt. 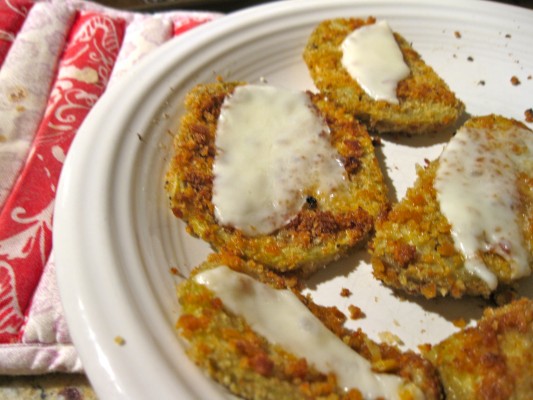 Remove from oven and lay slices of eggplant atop a serving of pasta. 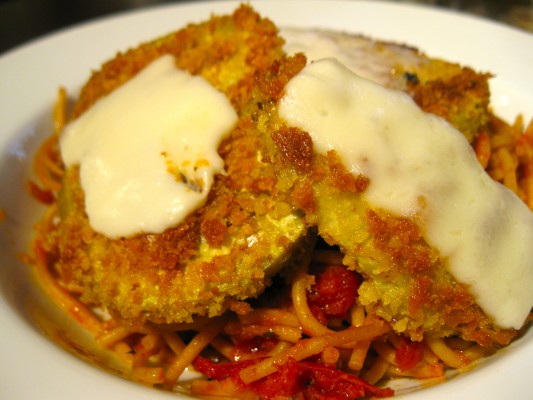 To reheat, place on baking sheet in 350 degree oven. Heat for 5 minutes to regain crispness.

« My Cousin Makes Fonts
The Catastrophe of My Personality »