We had Jason’s 12 year-old cousin from Ohio staying with us recently. 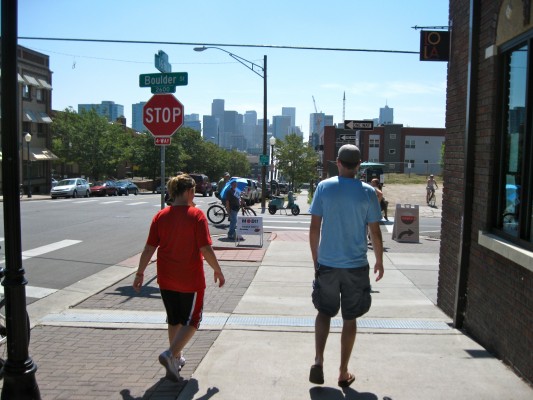 She had never liked peaches.

She had never liked tomatoes, either.

It took a bit of cajoling, but while at the market she tasted both a peach and a tomato.

It was a glorious day.

I wasn't surprised that she didn't like tomatoes before.

Tomatoes in season aren’t even the same thing as tomatoes out of season. Same goes for peaches.

Out of season, tomatoes are mealy, watery, and grainy.

In season, tomatoes are juicy and sweet.

In Jason’s words, in-season tomatoes have a clarity about them. They are pure.

Tomatoes are in season right now. It’s the time that so many have been waiting for for months and months (and maybe, even, months upon that).

In Jason’s cousins' honor, I have a recipe today that uses these delectably pure orbs. It also uses a few leaves of spicy, crisp basil. Those are in season right now, too. 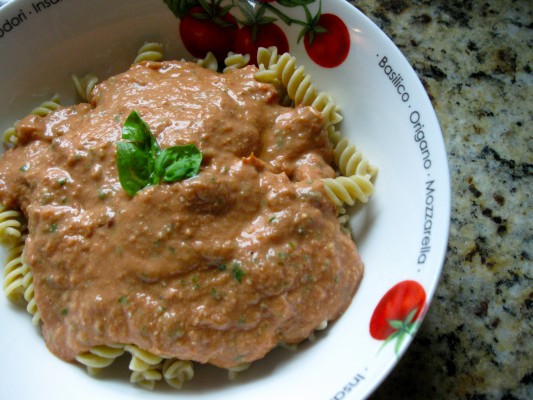 I think Jason's cousin would approve.

Begin by setting your oven for 250 degrees. Then, slice about 15 Roma tomatoes in half, lengthwise. Lay on a baking sheet. Drizzle lightly with olive oil and kosher salt. Place on middle rack of oven. Allow to roast, 4-6 hours, until tomatoes are shriveled and the juices are beginning to caramelize. 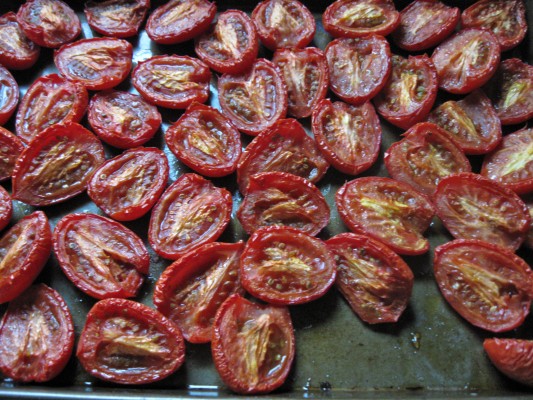 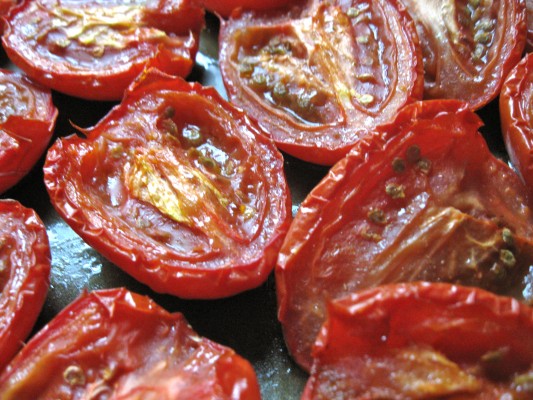 The roasting softens the tomatoes and deepens and concentrates the flavor.

I enjoyed several of these tomatoes hot off the baking sheet, with a tear of bread and a little chunk of blue cheese. I almost didn't continue on to make dinner - it was that good. Promise me you'll try a tomato (or seven) with bread and blue cheese, okay?

As your tomatoes are finishing up in the oven, set a large pot of water to boil. Generously salt the water when it comes to a bowl, then add in the pasta. I used rotini, but any short pasta would be delicious. Cook until al dente, then drain. 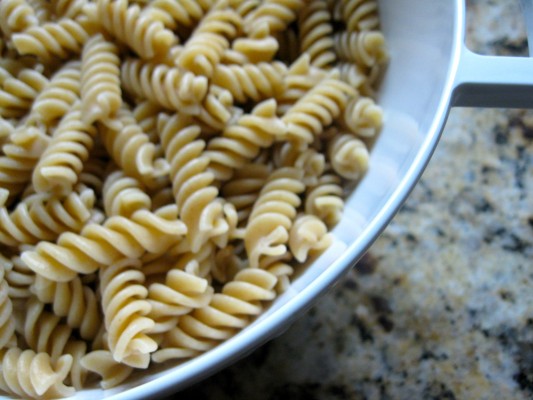 Once you tear yourself away from your little pre-dinner snack, throw a few roasted tomatoes into the bowl of a food processor. Add in about ¾ cup of grated parmesan cheese, and a cup of basil leaves. 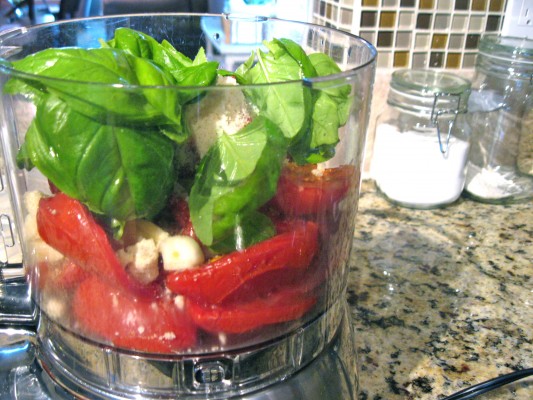 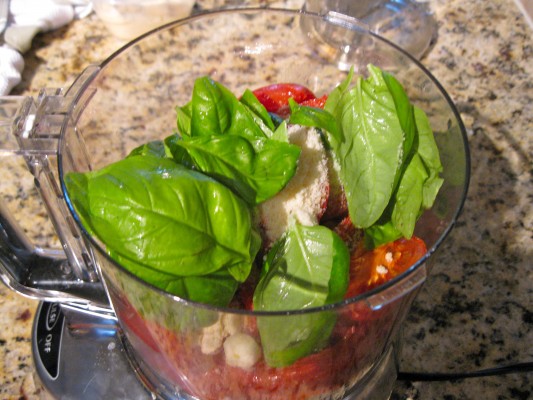 Place the lid on and process, drizzling olive oil through the spigot spot as it processes. You'll want to add about ¼ cup of olive oil in total. If your pesto is still too thick, you can add water from the pasta pot, about ¼ cup of water at a time, until your pesto reaches your desired thickness. I also added a splash or two of cream, because I had it leftover from this. The cream is what makes it creamy (obvious statement of the year) and gives it more of a muted color. The cream is definitely not necessary, but it was really tasty. Season with salt and pepper, to taste. I ended up adding about a ½ tbs. of kosher salt and ½ tsp. black pepper. I also added a little pinch of crushed red pepper flakes to spice things up a bit. 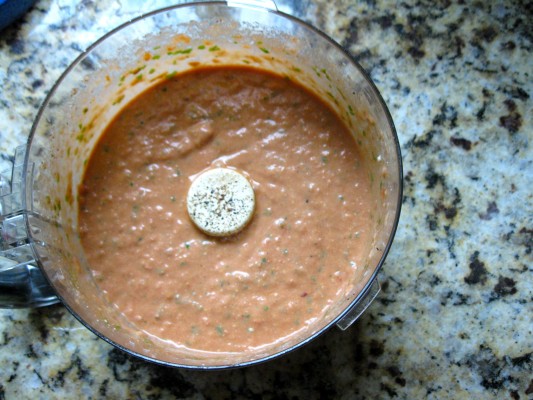 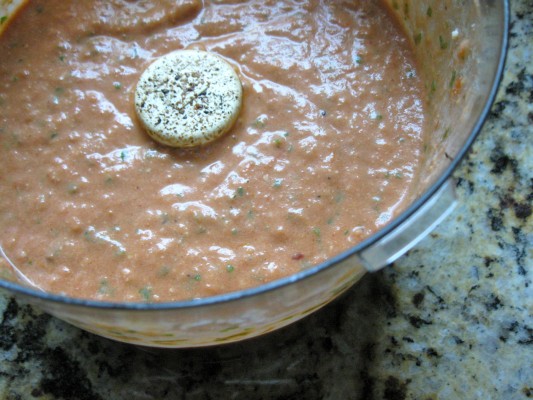 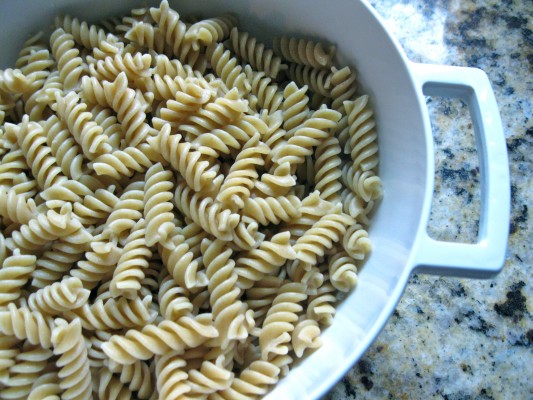 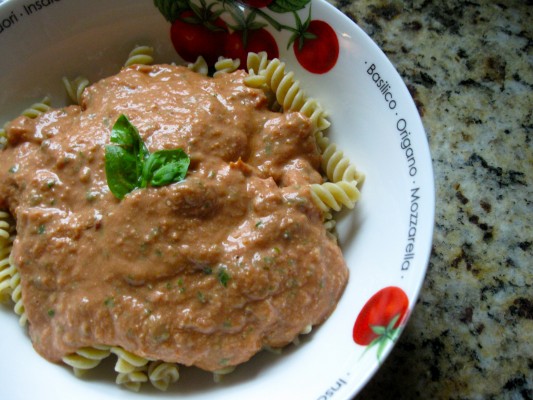 This pesto is rich and deeply flavorful. Make sure you have some crusty bread leftover from that pre-dinner snack, because you are going to want to soak this sauce up! Other than the flavors, my favorite part is that everything in it is perfectly in season right now! Just grab a bag of tomatoes and some basil on your next trip to the farmer's market.

You'll be so glad you did. 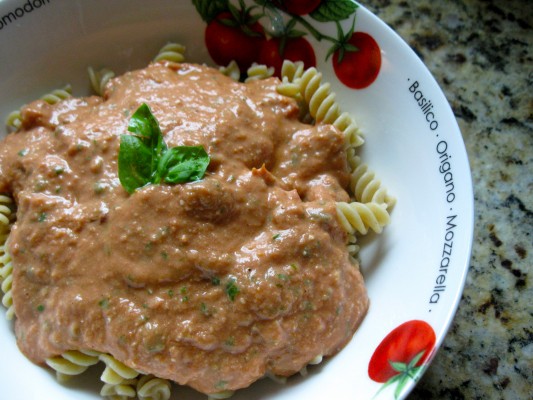 « My Dad Can Beat Up Your Dad
Why I Wake Early, by Mary Oliver »