Home » Blog » The Martini Olive that Launched a Thousand Pretzels

I stole more than just a recipe this time.

I stole a martini olive. 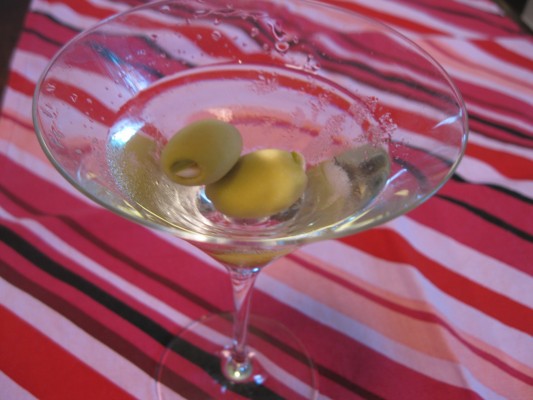 Now normally this might not sound like such a big deal, but you haven't tried these olives.

They're stuffed with garlic and jalapenos. They're delicious. They're from Costco.

You should buy some. Or you should just steal one from my husband. He likes it when people do that.

He likes it when you steal (one of) his olive(s) at the end of the martini so much that you definitely won't have to make him a batch of soft pretzels in penance. He's far too generous and giving and loving and mature to get angry over such a small thing as his wife stealing (one of) his martini olive(s).

Or maybe he isn't. Maybe that batch of soft pretzels really was my version of an apology. 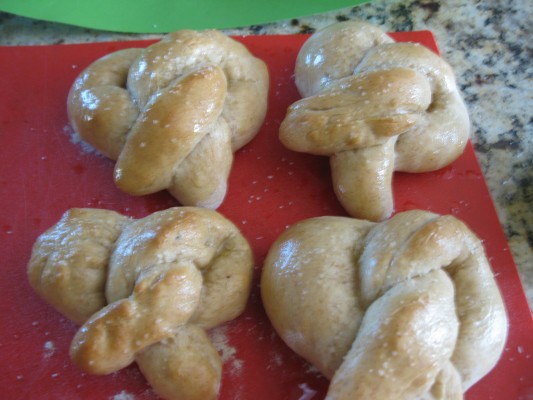 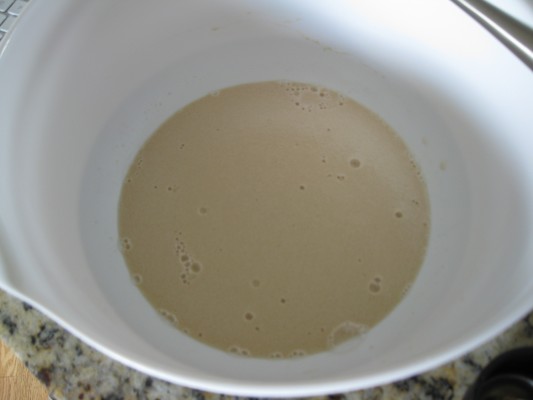 Melt a stick of butter in a large saucepan. 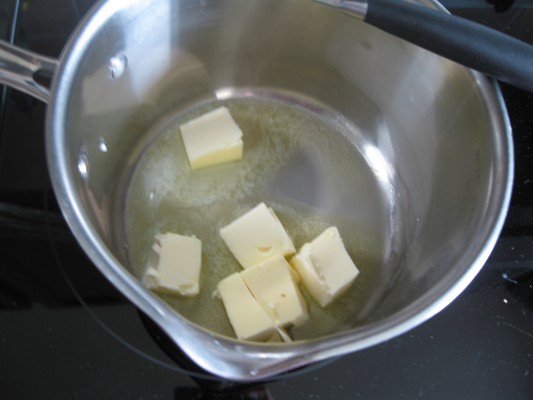 Add ½ cup honey and milk.  Heat to 120 degrees. Be careful not to overheat, as you risk killing the yeast (which means your pretzels won't rise!). 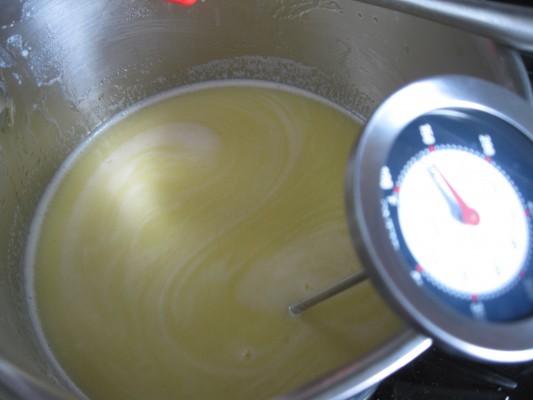 Pour milk mixture into yeast mixture and stir to combine. 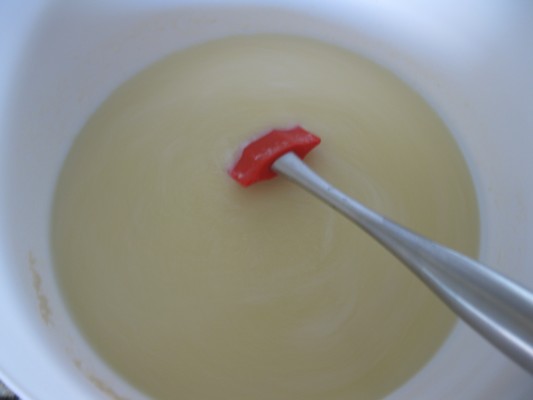 Stir in flour, 2 cups at a time. Knead dough for around 10 minutes, until elastic. If, as you knead the dough, you find it too sticky, just add more flour until the dough no longer sticks to your hands as you knead. 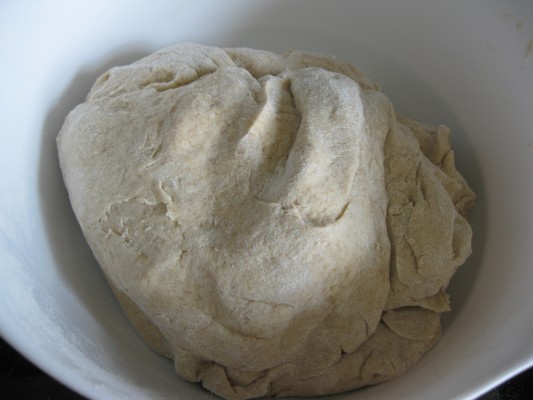 Keep dough in the same large bowl you mixed and kneaded it in. Place on top of the stove, cover with a kitchen towel, and heat oven to 350 degrees. This will create enough warmth to allow the dough to rise. Allow to rise for an hour and half. 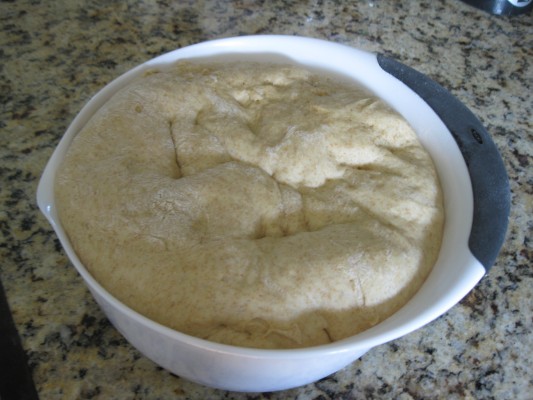 Once dough has risen, punch down a few times to get the air out. 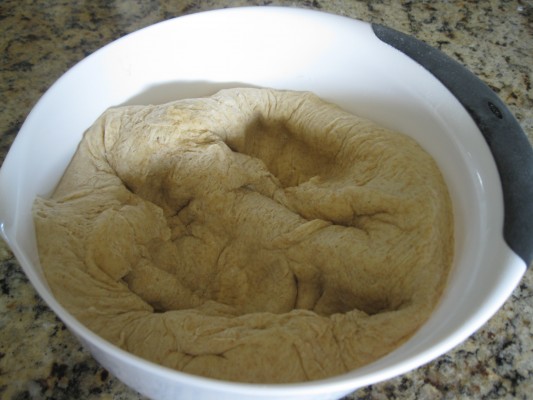 Pull a ball of dough, smaller than your fist, off and roll it into a long, thin, strip on top of a lightly floured work surface. 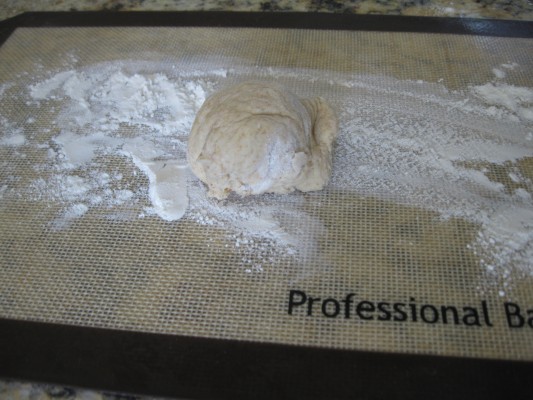 Loop the dough and cross the ends. 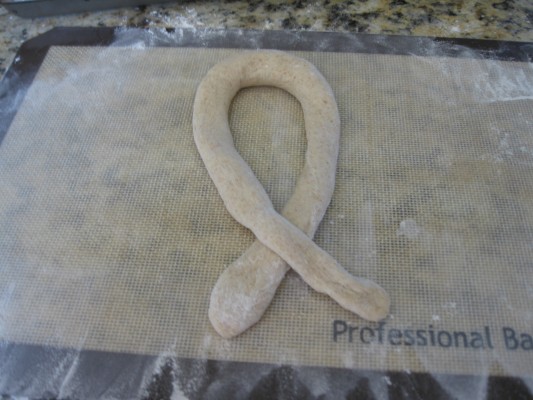 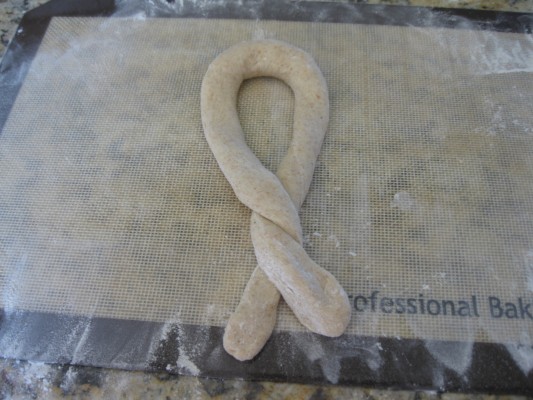 Then pick up the ends and pull them down to the bottom. It should look something like this, but really the pretzel will taste just as delicious if it isn't in the same shape. 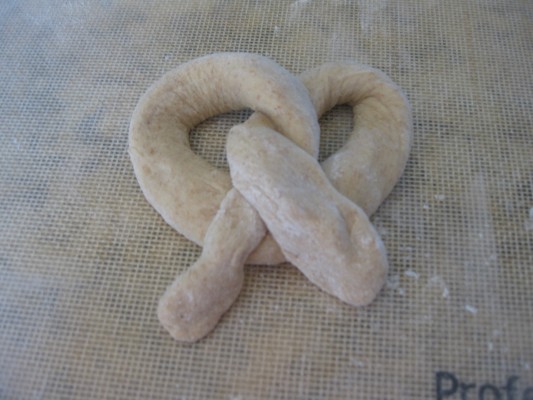 Place shaped (or un-shaped) pretzels a couple of inches apart on a baking sheet dusted lightly with flour. Bake for 20 minutes at 350 degrees. 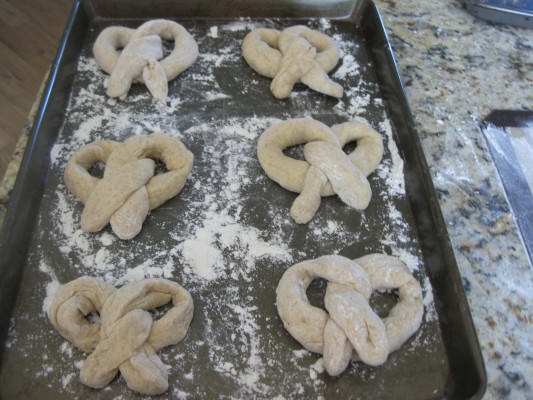 Note that the above photos are from the first batch I made today. After I saw how much the pretzels puffed up during baking, I started with less dough and made skinnier pretzels like this: 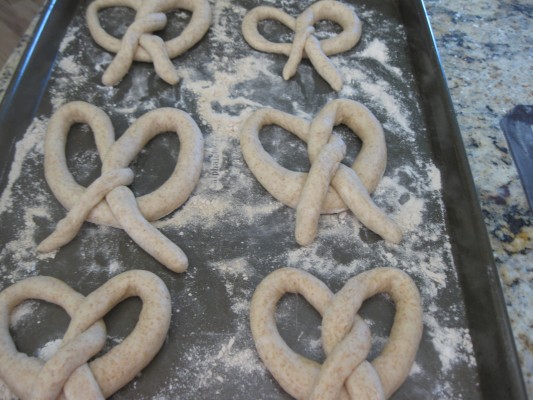 This method was much better.

While pretzels bake, melt a stick of butter. 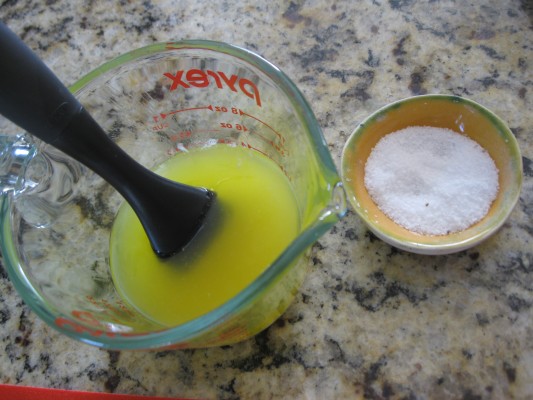 As pretzels come out of the oven (working one tray at a time), use a pastry brush to brush each pretzel with butter. Sprinkle each pretzel with kosher salt. Look at these chubby little pretzels. Don't you just want to pinch their cheeks?

Serve hot, and alongside spicy mustard. Or alongside a martini with an extra olive. 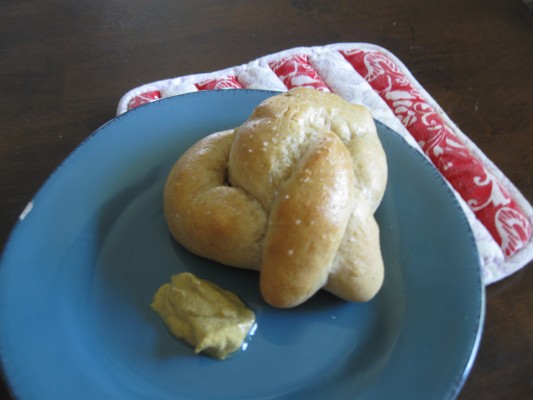 Jason may have finally forgiven me, but his martinis are still moving forward with the restraining order. If only martinis could eat soft pretzels...

« Things I'm Craving
Introduction to Poetry, and Goodbye to a Class »