Well, this is it.

I'm back to school today.

Students don't come for a while yet, but teachers will all be back and keepin' busy for the next week. As for me, I've got a majorly unorganized classroom to wrangle under control. When I'm not attending meetings, that is. A peek at what I've got to remedy in the next few days: 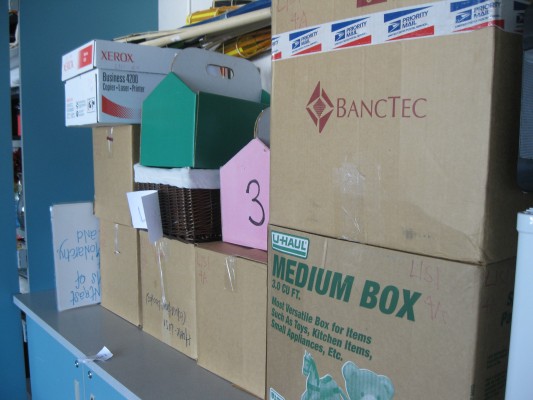 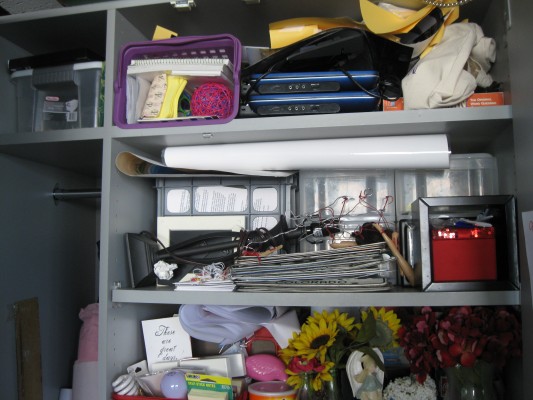 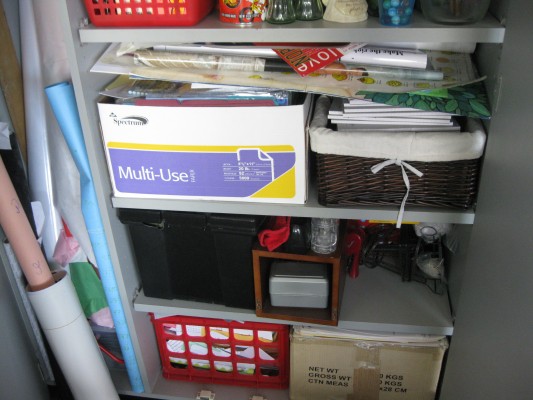 I've got a mess on my hands, that's for sure. But there are bigger messes than my classroom closet in the education system and one of them is in the area of food and nutrition: specifically school lunches. Now that schools are starting up again, there are all sorts of stories out about CSAP scores, the impact of budget cuts, and teacher effectiveness. What we don't hear enough about are the efforts that are being undertaken to turn around food in schools. I'm sure you've heard of Jamie Oliver and his Food Revolution, but so much more is happening right now. It's happening on a local level and it's happening in a way that I believe is going to change the very landscape and culture of school lunches for our students.

My friend Dave's wife, Hillary, has been working on one such project for the last few years. Both Dave and Hillary are passionate about education, and about food and nutrition. The impact that Hillary has is changing the way that our students are fed - which in turn has the power to change the way they learn, socialize, and perceive themselves. The New York Times just featured an article about Hillary's project; it makes me so excited that I just have to share it with all of you!

A few key points from this article:

-Eating well is not just for the elite

-Colorado is a leader in the back-to-scratch movement (!)

-Making food from scratch reduces the number of ingredients (the school's bean burrito is going from 35 ingredients to 12!), the chemicals, the sugar, and the sodium

-And the line that makes me want to cry, from a woman who has been working in a school cafeteria for 32 years: "“We’re going to teach children how to eat again."

That, my friends, is something to celebrate.

Read this article on The New York Times website

GREELEY, Colo. — The idea of making school lunches better and healthier has gathered steam in many parts of the nation in recent years, but not equally for every child. Schools with money and involved parents concerned about obesity and nutrition charged ahead, while poor and struggling districts, overwhelmed by hard times, mostly did not.

This midsize city in northern Colorado, where 60 percent of the 19,500 students qualify for free or reduced-price meals, is trying to break the mold. When classes start on Thursday, the district will make a great leap forward — and at the same time back to the way it was done a generation ago — in cooking meals from scratch.

Factory food took over most American schools in a rolling, greasy wave of chicken nuggets and pre-prepped everything over the last few decades. Now, real ingredients and spices like cumin and garlic — and in a modern twist, fiber-laden carrots snuck in where children do not expect them, like pasta sauce — are making their return to the cafeteria tray.

Getting ready for that counterrevolution here in Greeley involved a weeklong boot camp to relearn forgotten arts like kitchen math — projecting ingredients to scale when making, say, 300 pans of lasagna, which cooks were doing this week — and to brush up on safe cooking temperatures for meat.

“It shows it’s not just for the elite,” said Jeremy West, the nutrition services director for Weld County District 6.

Colorado, which has been the least obese state in the nation since federal health measurements of American girth began, is a leader in the back-to-scratch movement. Of the 100 or so districts nationally that have worked with Cook for America, a group that trains school cooks in healthier lunch-ways and ran Greeley’s boot camp, more than half are in Colorado, including schools in the largest districts in Denver, Colorado Springs and Boulder.

Nutrition experts say that many school systems around the nation, however much they might want to improve the food they serve, have been profoundly distracted by years of budget cuts and constriction. Many face structural problems, too. Some newer schools have tiny kitchens designed for only reheating premade meals, while some older schools have outdated electrical wiring that cannot handle modern equipment. Many districts, and their lawyers, have also grown fearful of handling and cooking raw meat, as food-borne illnesses like E. coli have made headlines.

“A lot of schools are looking to prepare more items from scratch, and starting to prepare more, but there are tremendous hurdles,” said Diane Pratt-Heavner, a spokeswoman for the School Nutrition Association, a nonprofit membership organization of school nutrition professionals.

Greeley’s schools will be cooking from scratch about 75 percent of the time on the opening day, with a goal of reaching 100 percent by this time next year, when ovens and dough mixers for whole wheat pizza crust will be up and running. But already, the number of ingredients in an average meal — not to mention the ones that sound like they came from chemistry class — is plummeting.

Consider the bean burrito: last year, in arriving from the factory wrapped in cellophane, each one had more than 35 ingredients, including things like potassium citrate and zinc oxide. This year: 12, including real cheddar cheese. Italian salad dressing went from 19 ingredients to 9, with sodium reduced by almost three-fourths and sugar — the fourth ingredient in the factory blend — eliminated entirely.

Statistics showing obesity rates growing faster here in Weld County than in surrounding areas gave the project impetus with district administrators, Mr. West said. The argument was then cinched by the numbers, which showed that going back to scratch would not cost more at all, but could in fact save the district money in the long run.

From the Colorado Health Foundation, a nonprofit group that has helped districts all over the state return to healthy cooking, Greeley got $273,000 in grants, which helped defray much of the $360,000 for construction and new equipment.

Equally crucial was the fact that the district still had a huge central kitchen space that was partly intact from the old days, including a bank of giant ovens that for some reason were never ripped out in the 1980s when cooking from scratch faded. That sharply reduced transition and projected operating costs. Even with 10 new hires in the core kitchen, Mr. West said, 10 net food service jobs were eliminated, since many lunch workers in individual schools were no longer needed.

“The biggest myth is that it costs more money,” said Kate Adamick, a food consultant based in New York and co-founder of Cook for America. She said federal reimbursement rules could actually give poorer school systems some advantages in shifting back to scratch, especially for meat, which many districts buy with deep discounts. Cooking the meat themselves, rather than paying a processor, can drastically reduce total costs, she said.

Meanwhile, the district’s first executive chef, George Coates III, who trained at the Culinary Institute of America and worked in high-end restaurants in Arizona and elsewhere, is plotting a food revolution. Mr. Coates, known in the kitchen as Chef Boomer, said he envisioned good food not just taking over the schools here in Greeley, but also eventually filtering back into homes, reconnecting parents with cooking through a system of recipe sharing — especially if, as he hopes, children go home and talk about the good food they are getting on his watch.

And he has a trick or two up his white sleeves. Take macaroni and cheese, for example. It will still be a staple on the new menu and will still have that bright, strange yellow color that children have become accustomed to, but it will not be artificial. “No natural cheese is that color,” he said.

Greeley’s version will be colored by turmeric, a spice associated with Indian cooking. “Adds a really interesting, subtle flavor, too,” Mr. Coates said.

Elida Martinez is among the kitchen workers who saw the full circle of change over her 32 years at the district. She sees now, she said, that the old days of cooking from scratch were not perfect. Dessert, often gooey, was offered every day, for example, and there was not a lot of fussing over sodium or fat. The new menu plan makes dessert a special occasion.

“We’re going to teach children how to eat again,” she said.

Some things, though, are going back the way they were. A recipe box from the old days was found, tucked away in an office, maybe even saved with hopes of this moment. Chef Boomer said his chili recipe, with a tweak here and there, would be pretty close.