I mentioned at the end of Friday's post that part of our decoration of Jay's house included diagnosing his style, following in the footsteps of my favorite designer, Emily Henderson. Emily hosts HGTV's Secrets from a Stylist and she starts each job with a "style diagnostic", which helps her figure out her clients' styles. She creates cute little names for each of the styles, such as "Midcentury Artist", "Eclectic Cool", or "Tuscan Modern". Seeing as I am in love with every design Emily creates, I knew that we needed to start off by diagnosing Jay's style.

To do this, Jason and I thought about Jay - what he likes, where he travels, what restaurants he goes to - and even showed him a few photos of room interiors and asked what he liked and disliked about each of them. We went into it with a few ideas, but after talking with Jay, we decided that "International Country Club" was a style diagnostic that even Emily would approve of.

The first day that we were in Portland was a busy day: Jay and Jason worked on the garage (unpacking, moving things into the attic, hanging shelves, installing workspaces, etc.), while I tackled the inside of the house. Jay was incredibly flexible: I asked him if I could just start "playing" with his decor (aka, moving things around and trying things out). He said yes. I asked him if there was anything that couldn't be moved or anything that he did not want me to touch. He gave me full permission (a dream come true for a crazy like me, really) - the only thing that needed to stay was a clock on the mantel.

As soon as the boys were out of the picture I set to work. Unfortunately I forgot to take before pictures. Stupid. But, here's how the process went, for any of you looking to do some redecorating at your houses. I started off by going through cabinets, pantries, and closets (kitchen, family room, and office) looking for "treasures". By treasures I mean things of interest - cool things, fun things, functional things that were maybe being overlooked. This included vases, pitchers, books, tins, trays, statues, cigar boxes, chalices, bowls, records: anything and everything that I thought could have a visual impact. I placed all these things on the tables in the living room. Then, I just started placing items on shelves, working to create little vignettes - moments of visual interest that would appropriately fill the space.

For "International Country Club", my goal was four-fold:

1. To show Jay's international side (he has an enormous love of traveling and has spent a great deal of time traveling the world).

3. To make it work with what he had and purchase as little as possible.

Here is the result: 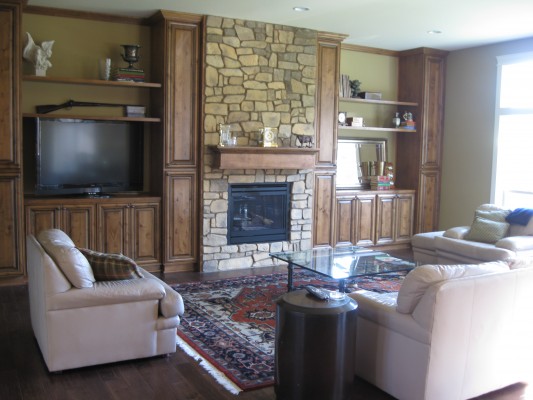 And a few hastily-shot close-ups of the shelves: 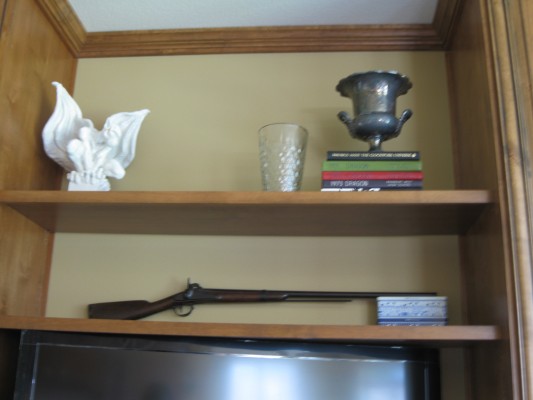 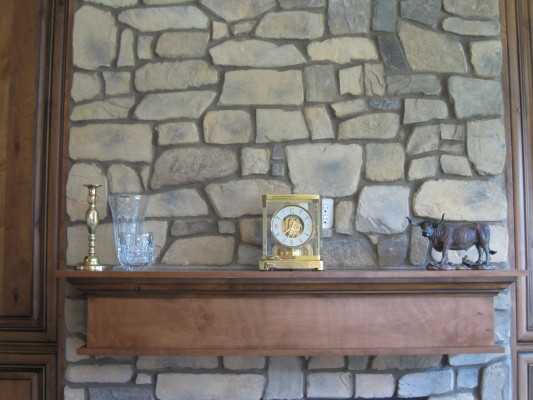 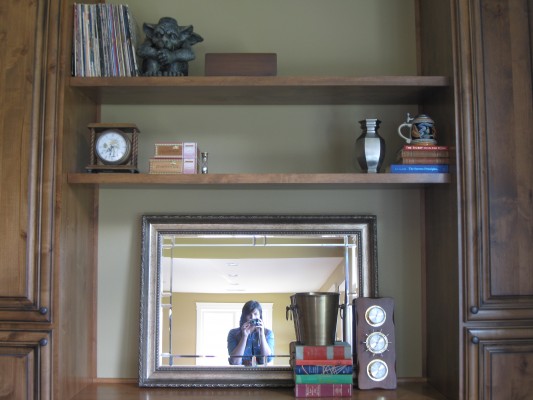 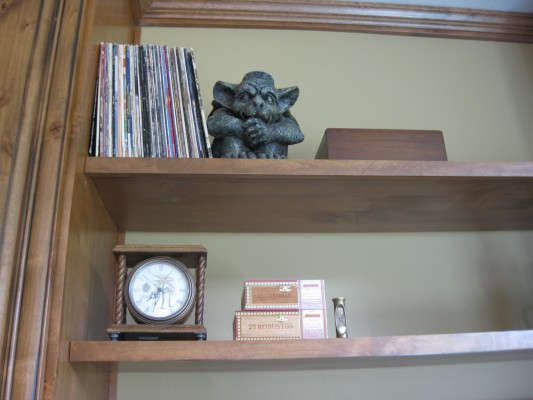 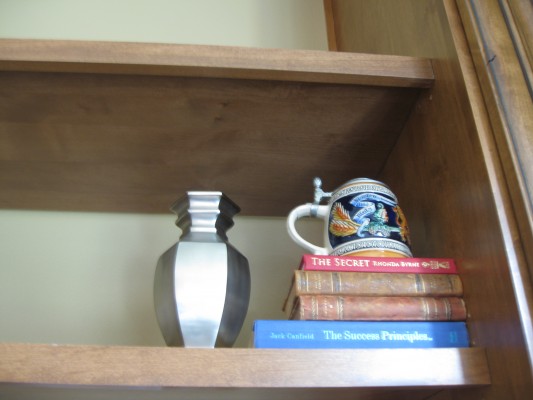 Everything on these shelves is something that is not only visually interesting, but also has a story attached to it. The rifle hung above his father's fireplace when Jay was growing up, the cigar boxes are from his travels to South America, the clock and the large chalice were gifts that his parents received, the books are a combination of yearbooks and books that he has read. My favorite piece is one I nabbed from Jay's room: 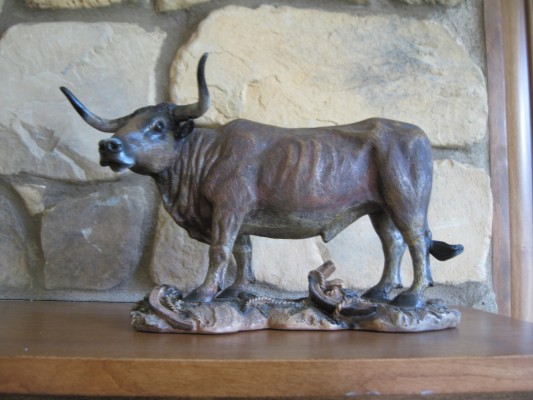 How cool is this guy? It was a gift from Jay's mother, who gave it to him while he lived in Texas. So fun and brings a great part of who Jay is into the room. Whatever will go above the mantle is still in progress. A few ideas that we have is to do two vintage, leather-wrapped golf-clubs in an "X", or searching antique stores for a large wooden sign or crest. We'll see what Jay ends up discovering.
I had so much fun playing with the decor in this room, and the best part was seeing Jay's satisfaction with having all of his little treasures out where he can see them and tell stories about them. For me, this room is the perfect example of how you can use what you have, by digging up those items that have been in hiding in the backs of closets or in cabinets - and putting them on display where you can enjoy seeing them everyday.
The key to decorating open shelves like these is to keep things balanced. This means a few things:
1. Tall spaces need tall objects.
2. Colors need to be balanced equally amongst the shelves so that there isn't a large clump of black, or white, which would throw the balance off.
3. Group objects in sets of three to create little vignettes, or little moments of visual appeal.
Here are a few other shots so that you can see how the entire living area is fitting in with the concept of "International Country Club".
We hung the frame above the table, although the print hasn't yet arrived. Jay selected a vintage map of Texas that will hang in there. The frame, the sunflowers, the vase, and the rocks were all Ikea purchases. I love the pop of color that the sunflowers provide, while still maintaining the style and the masculinity. 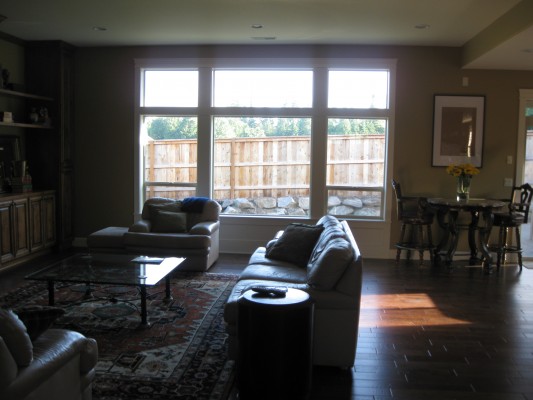 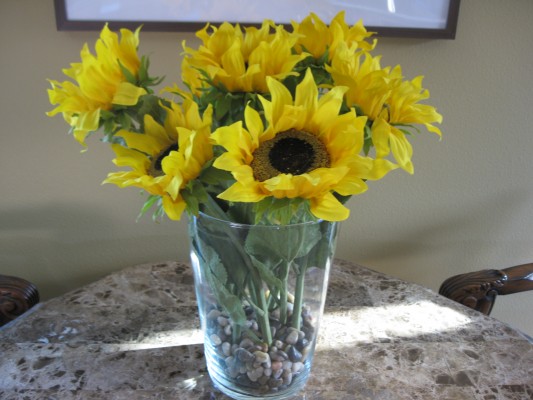 Jay ordered four new barstools while we were there - they are the same height as the ones below, but they are made out of the same dark brown wood as the pub table and the bar and are wrapped in a deep red leather with brass nailheads. I love them. They are perfect and are going to really bring the space together. 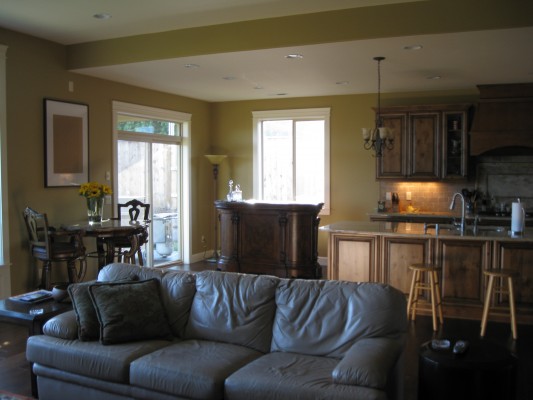 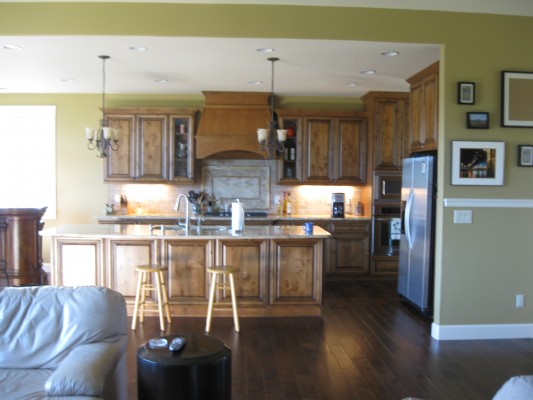 I rearranged the kitchen and open cabinet items, as well. Apparently I only took a close-up of the cabinet on the right. The two open cabinets are also visually balanced - the tallest items are both on the middle shelf, crystal vases (although different) are both on the bottom shelf, and they both contain pops of red. 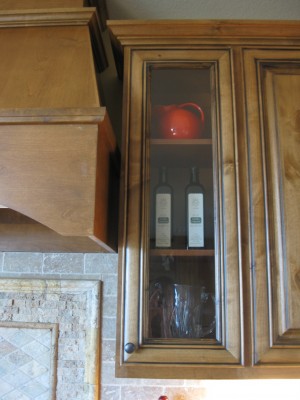 Countertop items are arranged in groupings of three. Jason created this grouping! 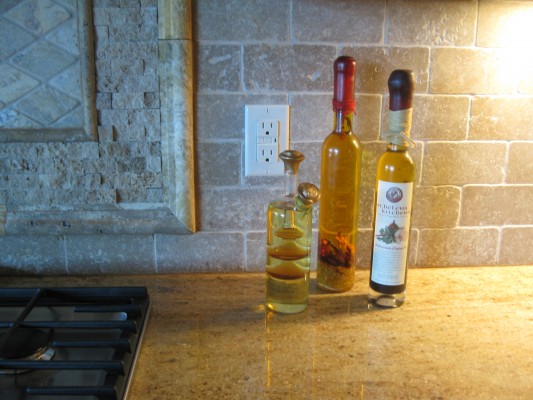 I pulled the utensils out of a drawer and put this pretty piece of pottery to work out on the counter. Again, the goal is a streamlined and clutter-free look. 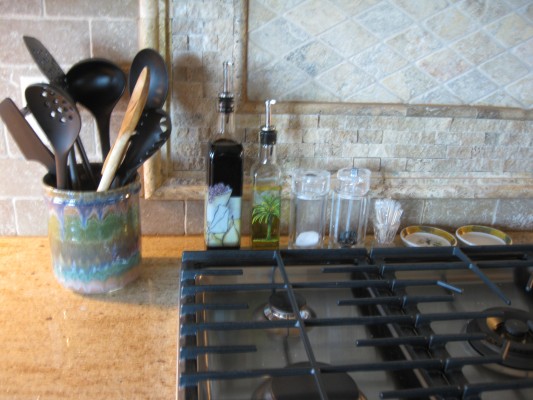 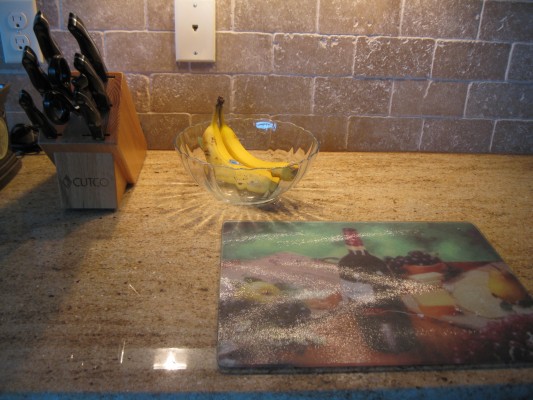 I seriously enjoyed decorating Jay's house so much and am thankful to him for allowing me to move everything around! The house looks so polished and is a place where I know that he will enjoys years of entertaining. I'm thankful for the part that he allowed us to play in creating his home, for the glass that he didn't get mad at us for breaking, and for (37) holes that he let us put in his walls.
My only disappointment is that we weren't there to see the final, finished product since we ordered several things online. Hopefully he will snap a few photos once everything is in its place and let me share them with you on here!
« The Tale of 37 Frames, Part II
The Best Asian Salad You'll Ever Eat »