The American Dream: it's not only about lingering high-school images of Jay Gatsby, staring longingly across the harbor at the elusive green light. It's about the street food, the meals on motors, and the hordes of people who come to devour the gourmet eats the food carts and trucks produce.

I have to admit that I am a bit of a latecomer to the deliciousness that are the food trucks; Jason and I took a trip to Austin this last April and it was there that I first started realizing that these trucks had something good going on. Fast forward to May and the opening of the Cherry Creek Farmer's Market and we were quickly introduced to two local trucks: the Denver Biscuit Bus and Pinche Tacos (yes, that really is their name!).

The Denver Biscuit Bus serves these amazing homemade biscuits topped with freshly fried chicken and homemade pickles, smothered in local honey and stone ground mustard. Seriously. So. Good. We were soon frequenting the Farmer's Market for the biscuits just as much as the produce. I don't know exactly what it is, but ordering (amazing) food out of a truck is so compelling for me. I think if I ever had a restaurant that I'd want to open up a food truck...maybe one that only sold sandwiches....anyway, these food trucks are just the tip of the Denver street food scene: just two weeks ago, the Justice League of Street Food hosted their first ever street party. Picture the scene: an empty dirt lot, a DJ, an urban winery, a local brewery, seven local food trucks, and a line winding all the way around the block! 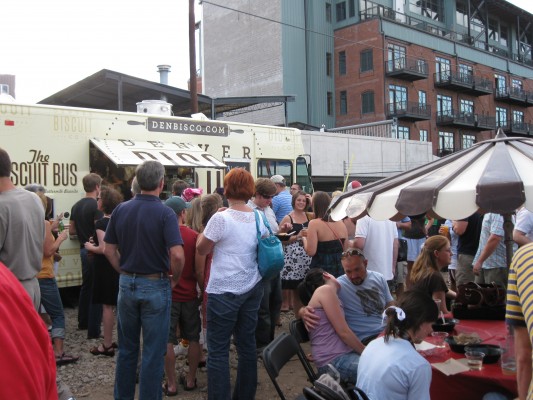 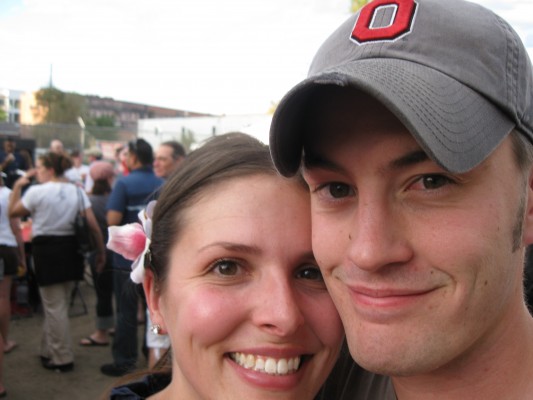 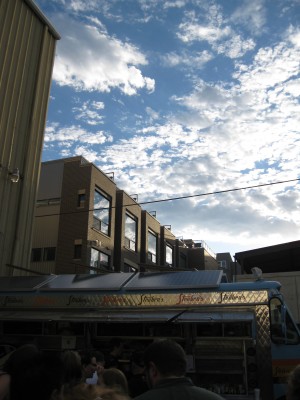 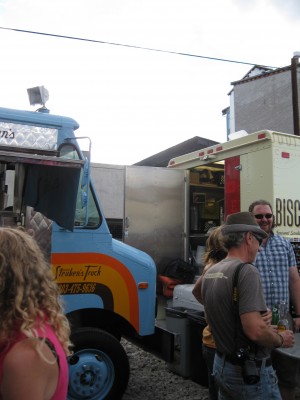 We went with our friends Carl and Emily and had a time that Jay Gatsby himself would approve of. We decided to try something other than the Biscuit Bus, and so went for Steubens. Burgers, fries, and their specialty...Steubie snacks, which are (are you sitting down?) little melt-in-your-mouth morsels of fried pork dusted with powdered sugar. I'm pretty sure Ava would have scarfed up the entire batch in one bite. Sadly for her, we ate them all before we came home. Sadly for me, I was ridiculously stuffed after all that street food goodness. Sadly for you, you weren't there!

Now, before you get angry at me for making you hungry before your lunch break (or for chastising you for not attending a party that you didn't know about), I have good news! If you missed out on the last Justice League party because you were a) washing your hair, b) out of town, or c) just out of the loop, then this is your lucky break....the Justice League has a 2nd, bigger, better party planned for September 16. We're planning on being there and I hope you will too. I'll post more details as we get closer to the date...

Now, for you non-Denver folks out there...what is the street food scene like where you live? Any favorite food trucks? Leave a comment below - I'd love to hear what it's like in your city.