We recently starting eating at little restaurant called Modmarket in Boulder which is one of our new favorite places. Their ingredients are all fresh, natural, and organic and their food is amaaaazing. My favorite is their barbecue chicken pizza, which is seriously so good. I decided to give my own pizza a try and....it turned out so well! (Jason says he likes it even better than Modmarket's 🙂 which is probably the best compliment he can give me!) This meal was made (almost completely) out of items I had on hand, since I needed to stretch the food supply for just another day until payday. All in all, a success and a new mainstay in the Blackboard Kitchen! 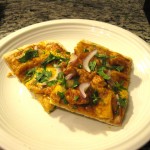 ½ cup of barbecue sauce, divided (we like Stubb's spicy sauce) 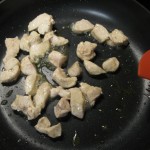 While chicken cooks, preheat oven to 350. Spray baking sheet with non-stick spray and sprinkle lightly with flour. Roll out dough into a long rectangle, to fit baking sheet. Lay on sheet and place in hot oven. Bake for 2 minutes. Remove from oven and 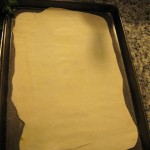 brush BBQ sauce over pizza crust. Layer with cheddar cheese, mozzerella slices, and red onion. Return to oven and bake for 5 minutes. Remove. While in oven, toss chicken with remaining BBQ sauce. Spread chicken over cheese and top with scallions and cilantro. Return to oven. Bake until edges of dough just start to brown and cheese is melted and bubbly, around 5 minutes.Remove from oven and cut into 8 slices. Serve hot. 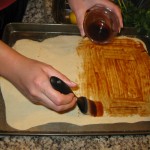 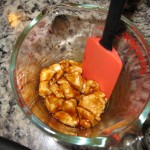 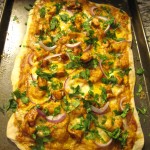