This recipe comes thanks to several people: my friend Teresa who brought in zucchinis, tomatoes, and eggplant from her garden; my friend Jeri who supplied the recipe; and my “cousin” Melanie who made us something similar for dinner at her house. Yes folks, sometimes it does indeed take a village! 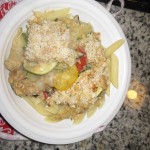 fresh (if you have it, dried if you don’t) rosemary, thyme, and parsley (about 1 ½ tbs. chopped of each if fresh, ½ tbs. of each if dried) 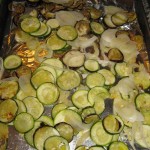 Preheat oven to 350 degrees. Slice all vegetables thinly. I used a mandoline for the eggplant, onion and zucchinis, but you can just cut with a knife if you don’t have one. Lay on foil-lined baking sheet and drizzle with olive oil. Sprinkle with salt and pepper and slide into the oven to roast for 15 minutes. You want the veggies to soften and release some water. Remove from oven.

While veggies roast, make breadcrumbs in food processor. Rip bread into medium chunks, coarsely chop garlic, thyme, parsley, and rosemary and add everything (including parmesan cheese) to the processor bowl. Pulse until crumbly and combined. Season with salt and pepper. 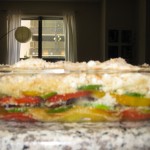 Layer vegetables in a small square glass pan. Layer tomato, eggplant, onion, zucchini, then breadcrumbs in pan. Repeat. Slide into oven and allow to cook until breadcrumbs are browned and crispy, about 30 minutes. 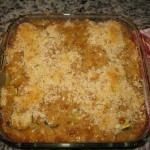 Slice veggie casserole into squares and serve a scoop of penne topped with one square casserole. The juice from the veggies makes a sauce of sort and the breadcrumbs make a crispy crunch.