The first time I ever had soba noodles was at the prompting of my father-in-law, who bought us a bag and insisted that we would love them. I was hesitant to try them, after a bad experience with a different type of Chinese noodle, but eventually we gave the soba noodles a chance. My father-in-law was right. We love them. Soba noodles are made of buckwheat and are like a cross between whole-wheat spaghetti and Ramen noodles. They are plump, chewy, and they absorb sauce really well, which makes them a delicious backdrop for stir-fry. 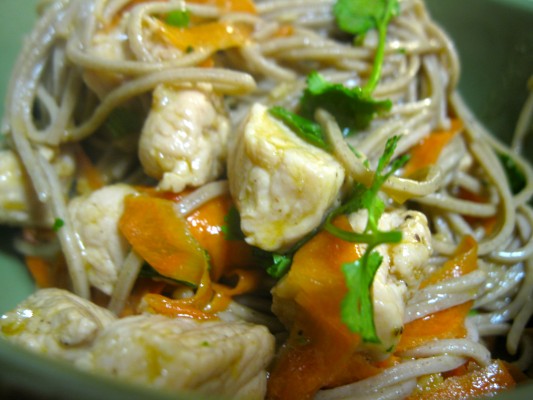 Heat sesame oil over medium in a large wok or large skillet. Season pork with salt and pepper, then toss with cornstarch.

Fill a large saucepan with water and bring to a boil. Once boiling, add soba noodles. Cook 2-3 minutes, then drain.

Once the wok is hot, add garlic and ginger. Stir and heat for 1 minute, then add pork. Allow to cook about 2-3 minutes, depending on the size of the meat, then add the soy sauce and chicken broth. Bring to a boil, then reduce heat to low. Let simmer for 2 minutes. Add the cooked soba noodles, peeled strips of carrot, chopped water chestnuts, cilantro, and scallions. Stir to incorporate. 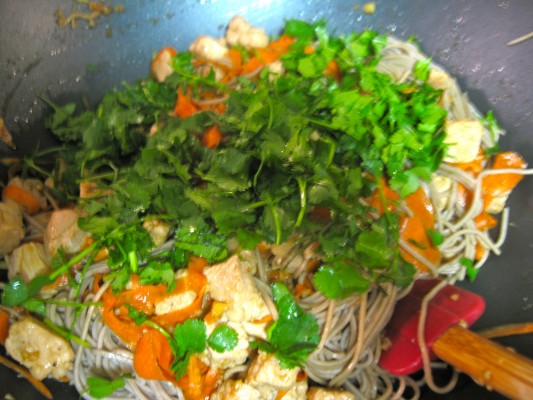 Spoon into individual bowls, then garnish each bowl with sesame seeds. (If your sesame seeds need to be toasted, simply sprinkle into a small, dry skillet and toast for 2 minutes on medium-low heat, stirring often to avoid burning. Once fragrant, they are toasted.)