1. My students like to try to guess how old I am. I like to tell them a different number each time they ask. Usually the number I tell them starts with at least a 5, sometimes with a 6 or 7. I've even told them that I'm in my 80's before. They usually believe it. It's fairly frightening. Except, last Thursday, a few students were having a conversation near my desk about my age. I told them I was 62. One of the students said that he knew I was lying. When I asked him how he knew I was lying, he said "She's obviously in her 40's. She's got the mean 40's." Ah, so true. Toddlers get the terrible two's. 29-year-old teachers get the mean 40's.

2. I'm currently waiting for this little number to arrive on my doorstep. I check the website about 10 times a day to see if it's shipped yet. It hasn't. My friend and colleague Marci ordered one at the same time. Our communications to each other have now been reduced to: "Any updates??? I'm dying!!!!!!!" I feel like I'm losing my mind. And my self-control. And my ability to communicate effectively. 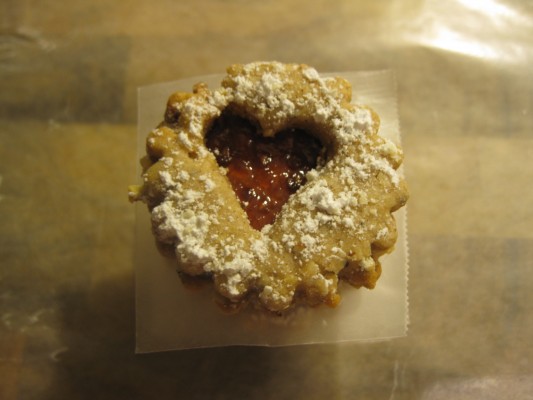 3. It's less than 2 weeks till Christmas! No, I haven't made any Christmas cookies yet. I'm about a month behind all the other food bloggers, I know. I'm hoping to get my first batch in the oven sometime this week, but once the item mentioned in #2 arrives, I know it will be hopeless. I'll be too busy organizing my entire life.

4. My students are far too aware of the fact that there are only six days of school left before Winter Break. It's getting painful. I think the mean 40's are going to continue to rear their ugly head throughout this week and next.

5. It turns out that Santa Claus reads Blackboard Kitchen! Shocking, yet true. More to come on this....soon.

6. I've caught a head cold. I'd blame Jason, but he's caught it, too. I think it's the first time we've ever had a cold at the same time. When you both feel sickly, who's in charge of cooking the chicken noodle soup? I think it's him. He thinks it's me. There was no chicken noodle soup tonight. But there were fried burritos, which are a pretty close second.

7. My cousin is in a type fight. Don't know what that is? I didn't either. Turns out it's a pretty cool thing, especially for a letter-counter like me.

8. I've said it once and I'll say it again: Spotify is a-mazing. Check out the new David Crowder Christmas album. Um, hello. It's only been playing on repeat for the last two weeks at my house. I hope my fandom makes up for my intense awkwardness at the Denver airport this summer. One can only hope.

9. My fantasy football team rocked it this week. I'm currently at 146 points, to my brother-in-law's 93 points. Take that, first game of round one of the playoffs. I own you.