Home » Blog » I (Wish I) Stole it From the Farmer's Market 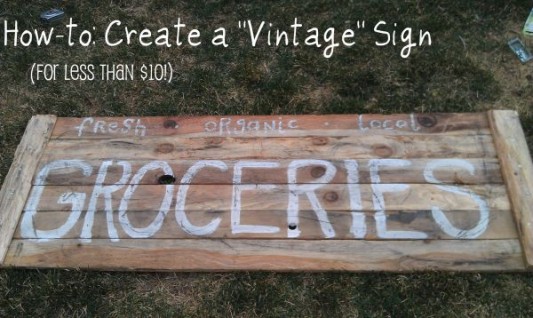 I wanted a sign to hang above the refrigerator. I wanted it to say "Groceries". I wanted it to be huge. And I did not want to pay $45 for a much (much) smaller version, which was the price of most of the homemade signs I saw on Etsy. (Like this one here, this one, and this one.)

So I set out to make my own. I entered Lowe's with a vague idea of what I wanted to create, but no plan or real concept of how I was going to make that happen. After a couple of hours, lots of wandering, many strange looks from the 70-and-older-males that seem to dominate Lowe's on Mondays between 1:00 and 3:00pm, and three phone calls to Jason (none of which he answered!), I finally had my project figured out and my supplies in hand.

Once I figured out how to make my sign a reality, this was a quick, easy project - and it cost less than $10! My sign is 5 feet long and about 2 feet high. You can make your sign narrower by using fewer fence pickets. Just be sure to measure your space before you go to the hardware store so that you know exactly what you need (aka: don't be like me!).

7 fence pickets - I wanted the boards to look beat up and so I went for the cheapest wood (it was 68 cents a picket) and dug through the pile for the pickets that had the most "character". I also wanted them to all look a bit different.

Supplies I had on hand:

Here's what I did: 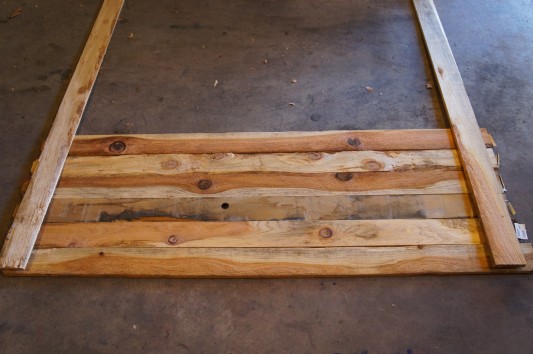 1. Lay out boards. Once I had all my supplies home and unloaded in the garage, I laid out all my fence pickets in the configuration that I would assemble them. I stacked the pickets on top of each other and lined up my extra pickets on the ends. I also used pliers to pull out all the staples and tags that were in the boards. 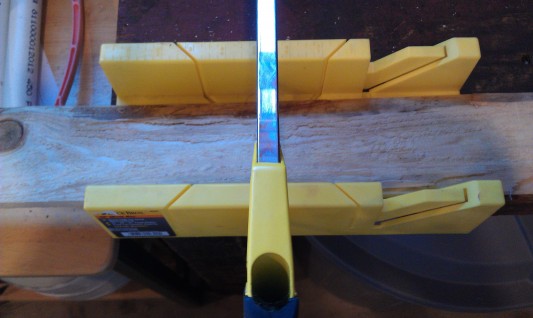 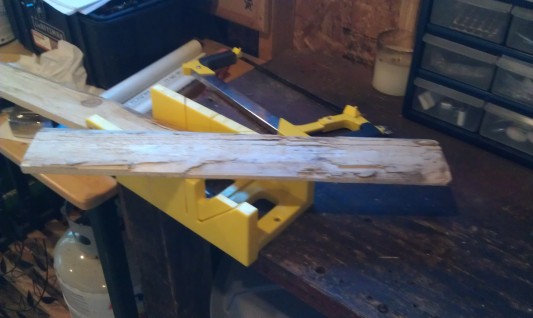 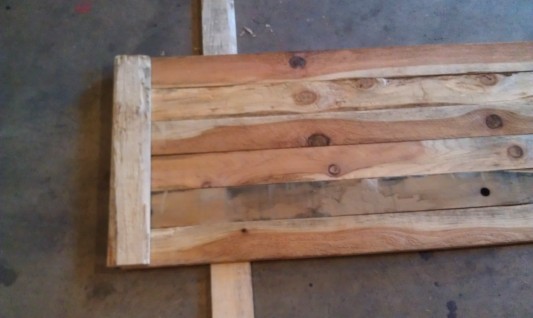 3. Nail end boards to the pickets. I used two different types of nails for this. First, for looks, I hammered one roofing nail into the board on each picket. What you see here is the front of the sign, which is where these nails were located. Then, I nailed a longer, 2-inch nail with a small head through the end boards and into each picket. My next step was to flip the entire sign over and bend the excess nail into the boards by hammering it in. 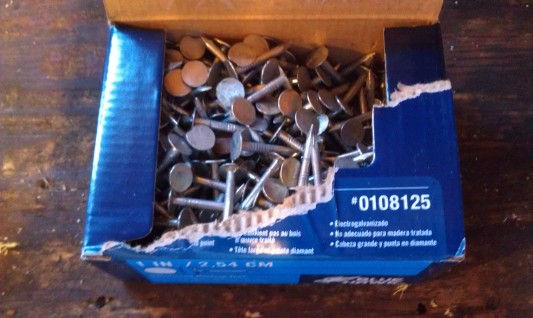 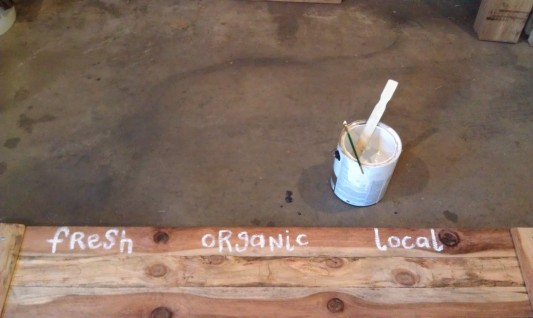 4. Painting time! I planned out what I would write beforehand, then simply used 2 different sizes of paintbrushes and white primer. For the small words at the top of the sign, I used a very narrow craft paintbrush that I've had for years. For the large "grocery", I used a larger paintbrush that I usually use to paint trim in the house. 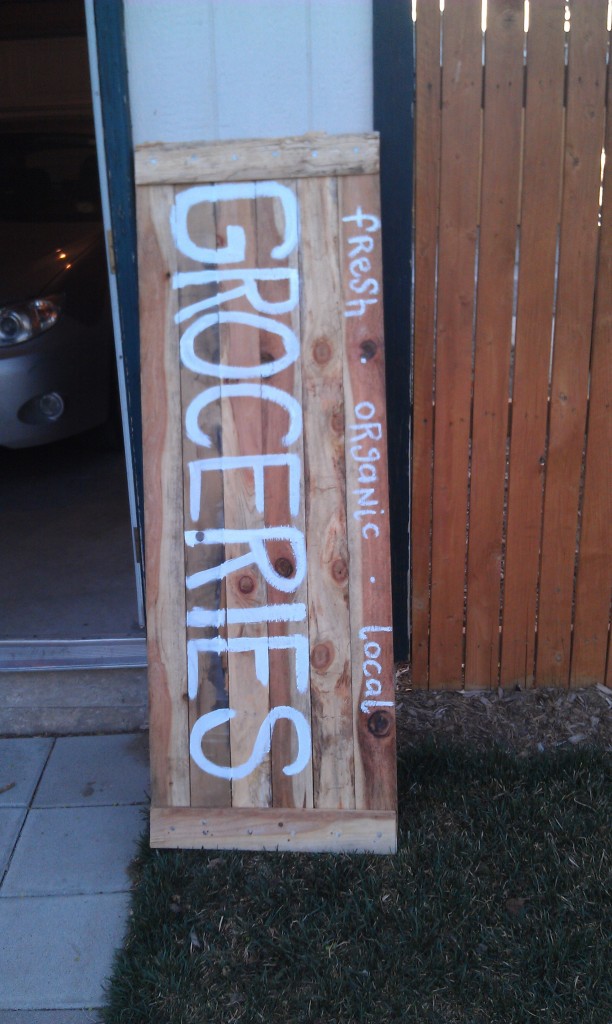 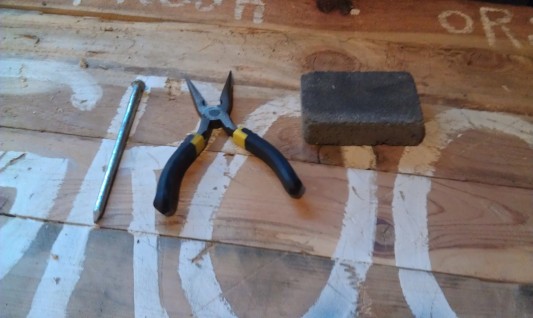 5. And then the sign was all painted and finished! Except, it looked new. Too new. Too-big, too-white sneakers on the first day of school new. So the distressing began. To distress the sign, I used a pair of pliers, which I just dug into the boards in various spots and pulled at the wood with. I used a sanding block (sand paper or even steel wool would also be good here) and scrubbed the paint with it to wear it off. I used a large stake to scrape along the board and just generally scratch up the board with. Jason used a hammer to bang on the corners of the board so they didn't look so fresh and square. And the final steps? I rubbed a used charcoal briquette across various locations on the board to darken it up. I did the same thing with a few handfuls of dirt to get that used, rustic feel. (Don't worry - I wiped it down with a rag before bringing it inside. It retained the discoloration, and I didn't have to worry about bringing any dirt indoors.) 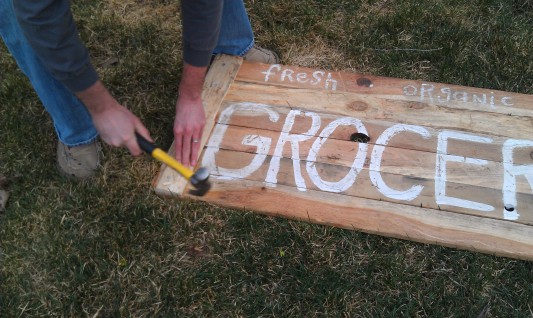 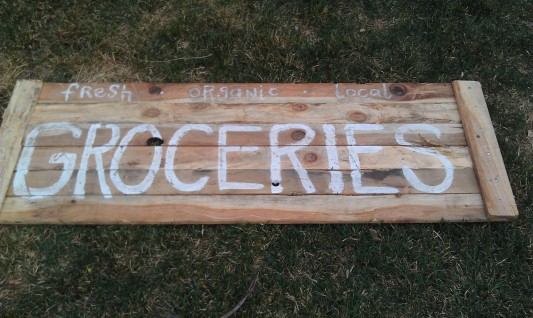 6. Once I'd beat up and dirtied the sign enough for my liking, I hammered in these picture hangers. They were super simple to attach; I placed one on the top right and one on the top left, both situated 6 inches from the outer edge of the board and 2 inches from the top of the board. (This measurement was also helpful for hanging the sign, later on.) 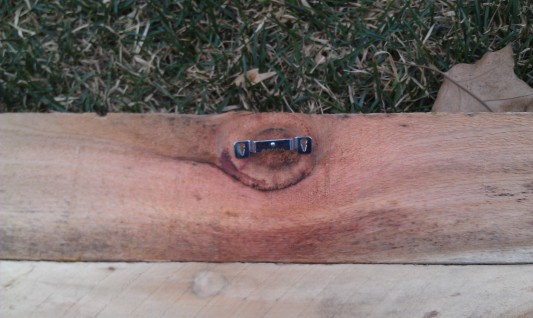 7. And then, Jason hung the sign up in its new home! Above the fridge it now lives, next to a red Texas star. The two combined make it feel just the tiniest bit country/rustic and give the kitchen a ton of character. They hang above the blackboard, which we created about a year ago. 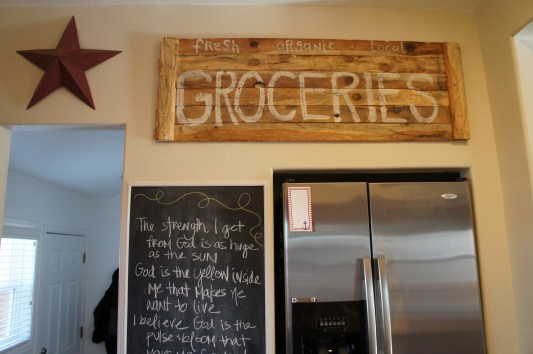 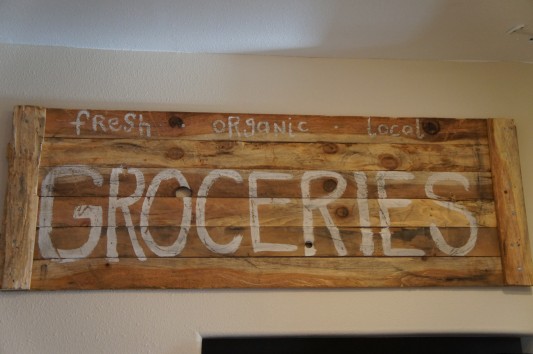 I am ca-ray-zay about this sign! Jason said that it looks like I stole the sign off of a booth at the farmer's market, which off course I love. And of course I'm going to pretend that I did. 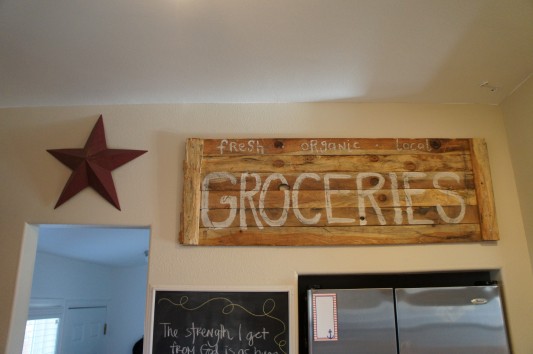 « Scenes from My Weekend
Some Things Just Go »