I suppose this isn't quite so much of a guest room "re-do" as it is a guest room "actual-do". But, nonetheless, here I am with the grand reveal for you. Sadly, there are no before pictures, but here's the deal: the guest room was being used primarily as the walkway to my closet (the guest room closet is my closet) and so we filled it with the bedframe that we had and the sheets that we had used on the guest bed in our last place. There was no grand design and we had decided to leave the walls blank, since we thought that we might be changing the purpose of the room down the road.

But then that all changed. Jason's parents booked flights into town (his mom is from Texas and his dad is in Washington) to visit us for Mother's Day weekend. And we realized that we were going to need to be able to 1. be proud of the room they would stay in and 2. shut the door, which we currently weren't able to do because the bed frame was too big.

Our goal was to make the above happen with spending as little cash as possible, preferably under $50. I'm hear to say that we achieved our goal - we actually came in exactly on budget.

The first thing we did was replace the fancy Crate and Barrel wrought iron sleigh bed (that was far too big for the room) with a back-to-basics metal bed. Jason hunted down the bed frame on Craigslist and we picked that bad boy up for a mere $20. Once in the room, things looked a little bare, so Jason (I was actually not a help at all for this first part) decided to just bring the C & B headboard back in to pretty things up a bit. He didn't do anything fancy - just stuck the headboard between the metal frame and the wall. 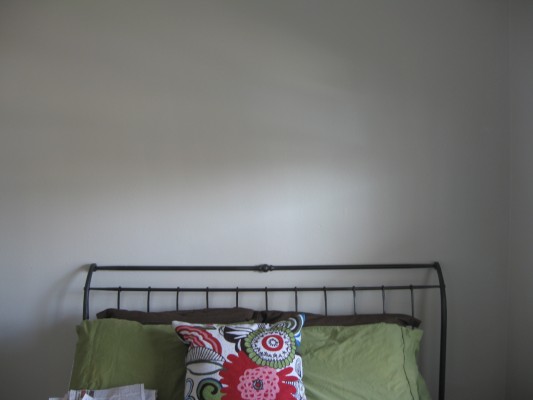 Now that the door could be closed (!), we decided to display some photographs above the bed. We've been collecting all these frames for a long time - really, I've been building the collection since I was student teaching, so the frames and photos were already there and cost-free. We used to have a gallery wall in our apartment that looked into the kitchen, dining area, and family room, and I missed being able to see the photographs every day. But, we hadn't had the space in the new place to be able to hang them, so into the guest room they were destined to go.

Now, to create a gallery wall we followed this strategy, from Young House Love. It really was a great way to do things. It helped us to do it (almost) right on the first try, rather than the frustrating multiple-try thing that so often happens when trying to hang this many photos at once. 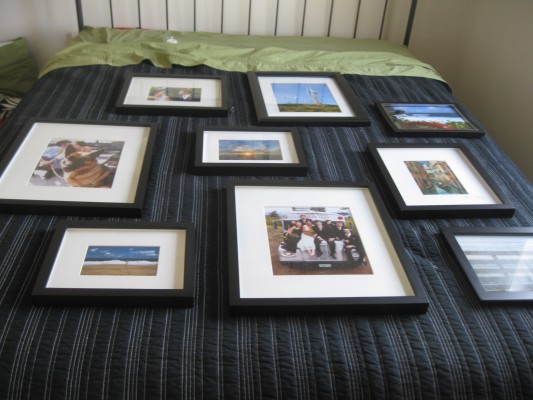 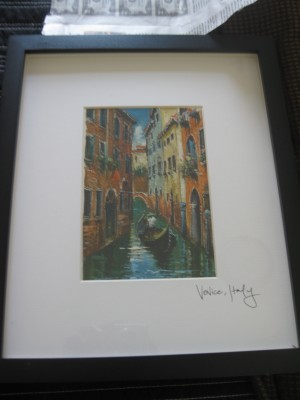 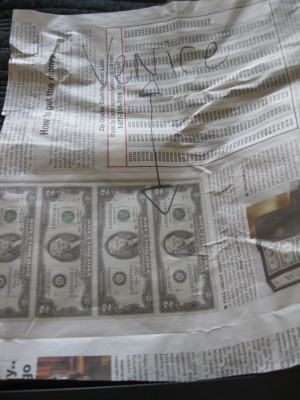 Step three: once we had all the templates, we taped them up on the wall in the same layout as they were on the bed. To this, I stood on the bed and moved the templates, while Jason stood at the foot of the bed and directed my placement, according to the frame layout. We adjusted until we were set on a layout that we liked and that we thought best filled up the space above the bed.

Step four: Jason measured the hanging point for each picture so that he could see exactly how far across and how far down each template the nails should go. 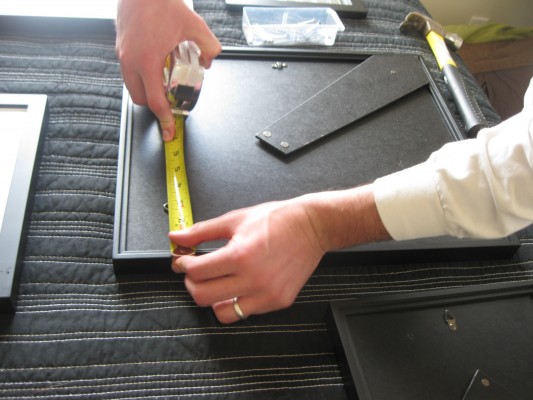 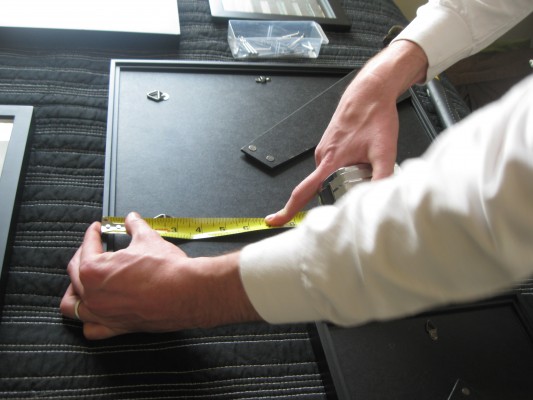 Then, he used those measurements to mark each template. He simply measured down across on each template to make a little "x", then nailed into the center of that "x". 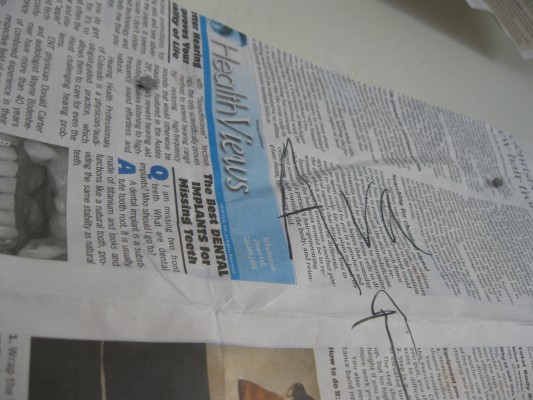 Step five: once all the nails were in, we ripped away the newspaper (and revealed a bare wall full of nails). Then it was hanging time! 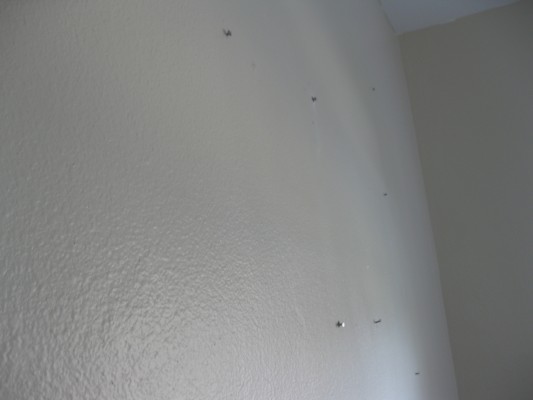 Step six: the grand reveal! I am so happy with the way this turned out! The best part is that it couldn't have been easier. Using the templates took all the guesswork out of hanging a gallery wall. 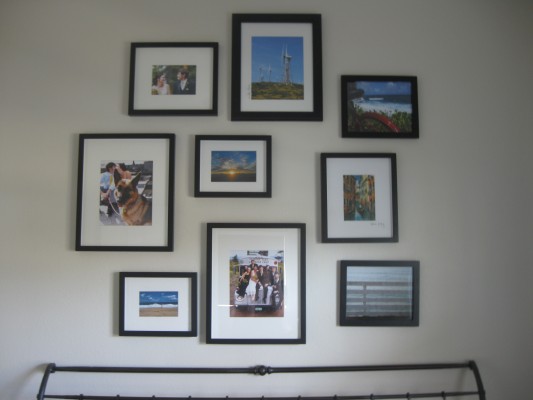 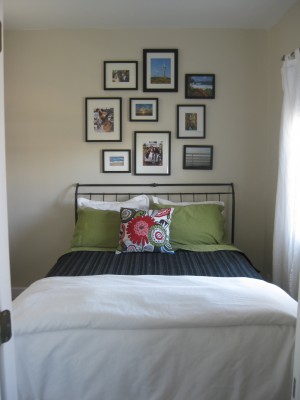 Also included in the guest room "actual-do" was the hanging of the white curtains on the window and the placement of this cute little corner. 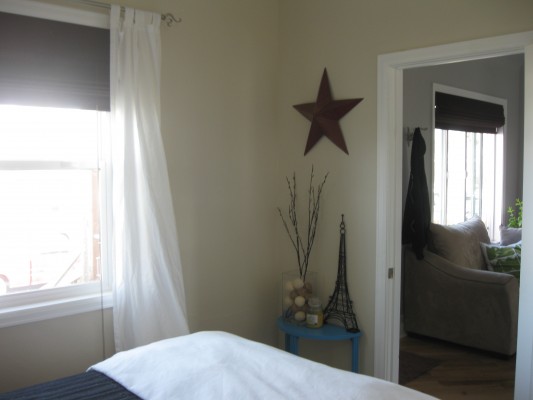 I LOVE this little corner of the guest room! The only item we bought here was the little turquoise table, which we found for $30 at an antique store in our neighborhood. It wasn't quite the steal that this lovely table was, but I think it is the perfect fit for the room. We needed something small and the fact that it is so bright and colorful just adds to the charm of the guest room. 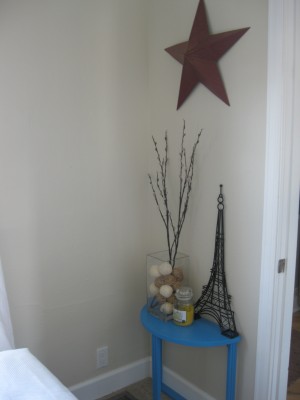 So, there it is...our guest room "actual-do" for exactly $50! Three cheers for repurposed decorations! Three cheers for gallery walls! Three cheers for Craigslist and antique stores! The room is so bright and cheery...it feels so fun and I love that it came together so easily. We definitely could add even more punch to the room by painting it a fun shade, but I think we'll just wait on that for a while. Who knows what I might end up doing, with summer coming up (in less than a month!). 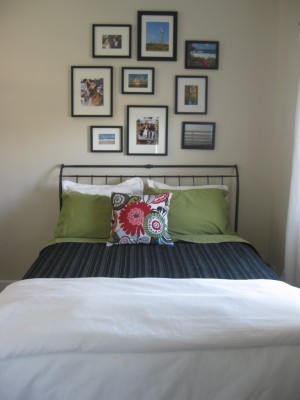 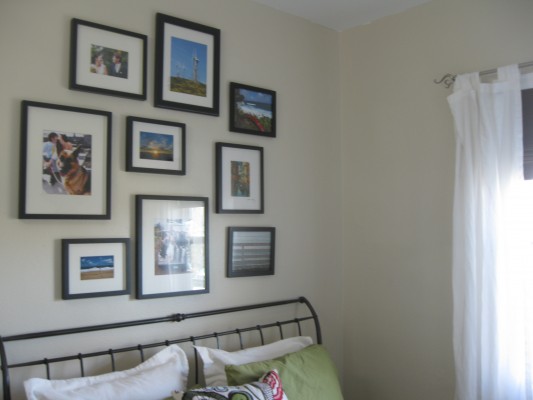 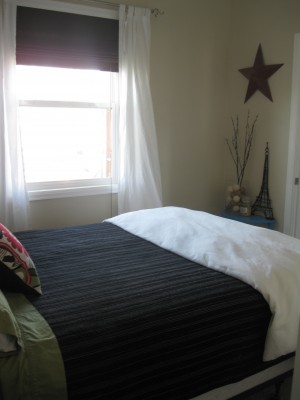