We went to the Festival Italiano this weekend! We were super excited to go as we haven't been able to go for the past several years (last year we were getting married on the weekend of the Festival!). We started off the day by checking out the bocce tournament. We're big bocce fans ourselves, so maybe we'll even get our butts in gear early enough to register for the tournament next year... 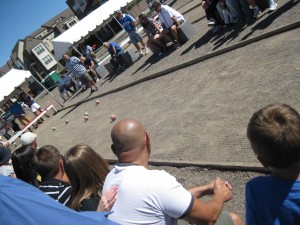 There were Italian flags hung over all the streets and booths set-up throughout the entire neighborhood. 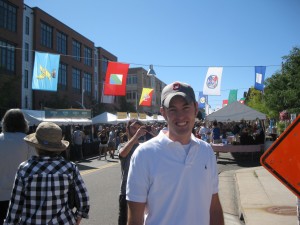 There were chef demonstrations going on throughout the entire day. We went to two demos: the first chef was making pasta with a tomato sauce and the second was making octopus (yuck). Although I wasn't a fan of one of the dishes, I still picked up several great tips (look for recipes using the new tips coming up soon!). 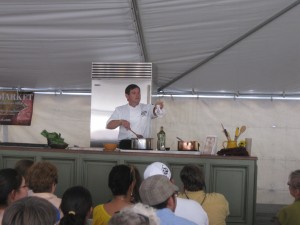 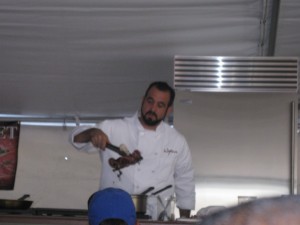 After getting grossed out by octopus, we left in search of some good eats. Lucky for us there was delicious pizza! Crispy on the bottom, soft and gooey on the top...yum!! 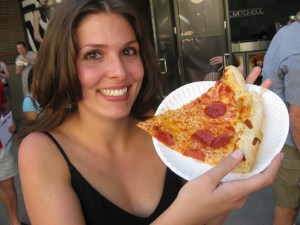 The Festival brought flag throwers from Florence, Italy to perform throughout the day. Interesting side note: as I mentioned earlier, the Festival was the same weekend we got married last year. We actually saw these guys at the airport when we were checking in for our honeymoon! 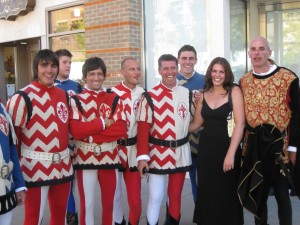 After that we decided that we were ready for some wine to wash down our pizza. Sadly for us, wine was selling for $6 per little plastic cup! We decided that was a bit too steep for our budget, so we walked over to the local wine shop and bought a big bottle...for $9. Put (some of) it in a Nalgene with ice and we were happy as clams for the rest of the Festival! Cheers to being cheap! 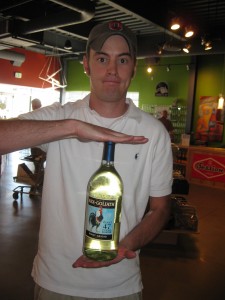 A flag thrower in action. Have you ever seen Under the Tuscan Sun? (If you haven't, you really should...) Well, I kept remembering the scene where the Polish boy is throwing the flags in the festival and he does it to show his Italian girl how much he loves her. "I throw the flag!" he says...then he gets bonked on the head by a flag....

These guys never dropped their flags, but I kept hoping I'd hear one of them proudly exclaim "I throw the flag!" They never did. 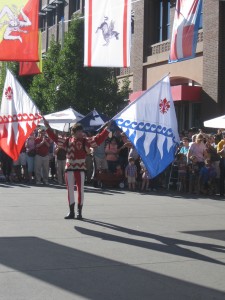 There was this big map of Italy with a sign that said, "Where are you from?". I made sure to mark my family on the map: my grandpa is from outside of Rome, and my grandma is from Pescara. They moved to America with their families when they were growing up, met and got married, and started their family here (these are my dad's parents). I am very proud of my Italian roots and all that my grandparents fought and worked for. 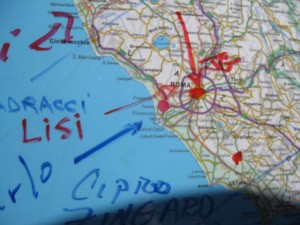 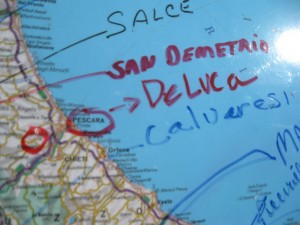 Our wine Nalgene was empty, our eyes were tired from squinting into the sun, and we had smelled all the delicious smells we could handle. We grabbed a baguette from a bakery on the street, and lettuce and garlic from our local farm booth and headed home. 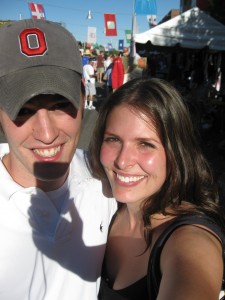 On our way home, we saw this. Yes, that is a child wearing a monkey backpack with a leash attached to it...and his brother holding the leash. Even funnier is that we saw another kid with a similar backpack yesterday...maybe these are the hot new thing? Maybe I should get one for Jason for our anniversary... 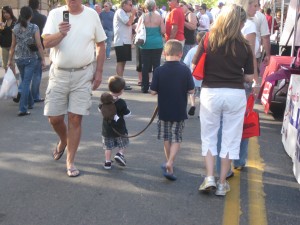 We went home and I cooked up our own Italian feast! Check out the recipe for my Crispy Ravioli with Green Salad here! 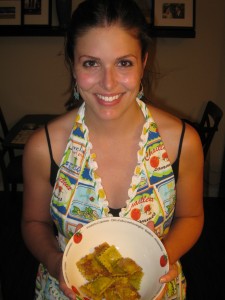 So now I'd love to hear about your weekend! I heard there were lots of festivals going on in Colorado...did you go to any of them? Leave a comment below and let me in on your weekend fun.

« Week 7 Menu and Grocery List
Use What You Got, aka Shake What Your Mama Gave You »