Jason is a big corn dog fan; everytime we go to Costco he's like the kid in the shopping cart, begging and pleading for a box of corn dogs. But we've never actually bought them. (I'm such a mean mom.) So, when Alton Brown's Good Eats came on Friday afternoon with a feature on homemade corn dogs we just had to take a stab at it.

We watched the whole episode.

We looked up the recipe online.

We made the recipe (almost) to a T.

They didn't turn out well.

The end result was edible, and not terrible, but definitely not a recipe you'll see on a weekly menu. They were overly crisp and greasy; not at all light and fluffy like Alton promised. (Alton! We feel so lied to!) Here are a few photos (but no recipe) so you can share in the pain of our corn dog adventure: 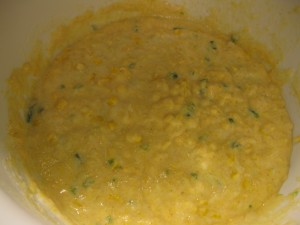 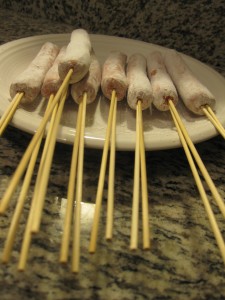 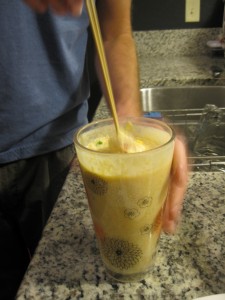 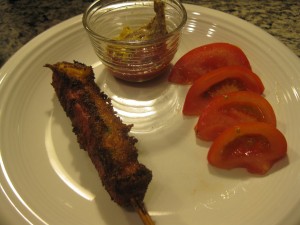 Not such an appetizing plate, is it? The leftover dogs ended up in the trash, the oil ended up getting tossed, and our house ended up smelling like a grease pit. We were disappointed and Jason's corn dog craving is still unfulfilled. Maybe I'll be a nice mom next time we go to Costco and grab him a box of the frozen stuff....

To assuage our sagging spirits and make us feel a bit better about our stinky house, I'd be much obliged to know we're not the only cooks who have failed, even after following a recipe! Have you made a meal that was deemed a failure? Or a meal where more food has ended up in the trash than in your belly?

Hope you have a lovely Monday, friends!