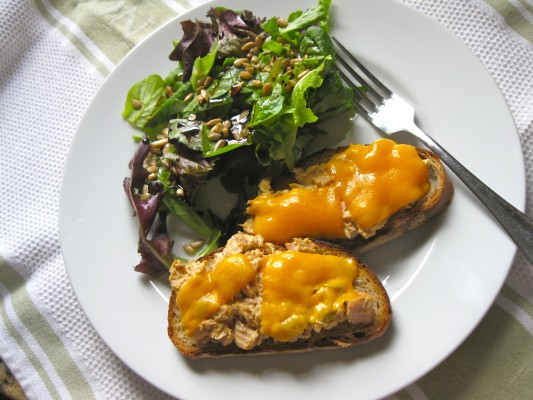 She refuses to even look at blue cheese, hates seafood, and doesn't much care for spicy foods. Or raw onions. Or brussels sprouts, tofu, or soy milk. The list might be slightly longer than this, but I'll stop here.

Suffice it to say that we didn't eat any of the items on the above list when I was growing up.

I think I ate seafood twice as a child. Maybe three times, but I'm pretty sure that third time was at someone else's house. And I'm pretty sure they served an entire, giant fish with its head on. And its eyeballs still in its sockets. Hello, nightmares. It was terrible.

I'm happy to report that I now thoroughly enjoy a majority of the items on the above list. I might even love a few of them. Um, blue cheese, anyone?

Although not at the top of her list, my sweet mama would actually be able to handle this meal. (Primarily because she does love cheddar cheese. And bread. I'm totally her daughter.) And she'd be so glad she did - it's ridiculously easy, only requires the oven for a few scant minutes, and is delicious. And, even though tuna is technically seafood, it doesn't stink up your house like, say, a giant fish might. And that is a very, very good thing. 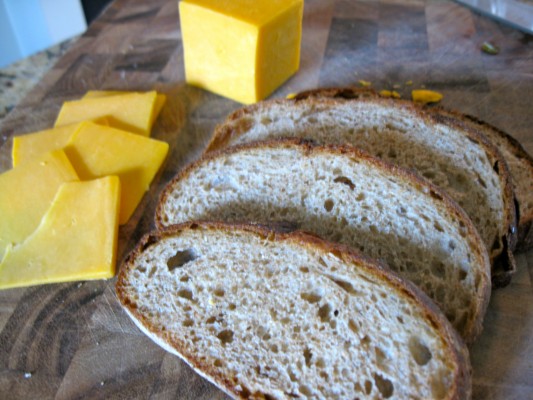 a dash or two of tabasco sauce

Heat broiler to 400 degrees (or on low). Place slices of bread on a baking sheet, then place under the broiler to toast, around 5 minutes. Keep your eye on these puppies so they don't burn.

Prepare the tuna salad while the bread toasts. Empty tuna into a medium bowl. Break up using a fork, then combine all other ingredients except the cheddar cheese. Mix well to combine. Taste and adjust seasoning as needed. Remove bread from broiler, then divide tuna salad between all slices of bread. Top with sliced cheddar cheese, then return to under the broil. Broil another few minutes, until cheese is melty.

Leftover tuna salad is delicious sans bread, too - serve atop a bed of lettuce, sprinkled with sunflower seeds and basalmic vinegar.